We all know that French style is la plus chic with its simplicity and elegance – it’s a look that every fashion girl wants to achieve. With French icons like Brigitte Bardot, Coco Chanel, Marion Cotillard and Vanessa Paradis it is no wonder that France is the birthplace of couture and the most sought after style in the world.

Well today I was feeling pretty suave standing at the train station in my beloved navy trapeze coat with a black faux-fur collar, when I spotted someone who’s sartorial elegance nearly brought tears to my eyes.

Sitting coolly on one of the station benches was a lithe young woman in the skinniest black high-waisters, a monochrome Breton top, and brown low-heeled ankle boots. Ugh! With her hair pulled back in a casual ponytail and a pair of Ray Ban Wayfarers perched on her nose this girl was subtle French glamour at its best.

So how does one achieve French style? Well a beret and stripes certainly help for that typical French look, but then you might as well go the whole hog and throw some onions round your neck whilst toting a baguette.

The key to French style is simplicity, tailoring, and classic cuts. Cast your mind back to Audrey Hepburn when she returns from Paris in the film Sabrina. Standing at the station wearing a Givenchy suit cut to within an inch of its life, Hepburn is a paragon of French elegance – concise, simple, beautiful. 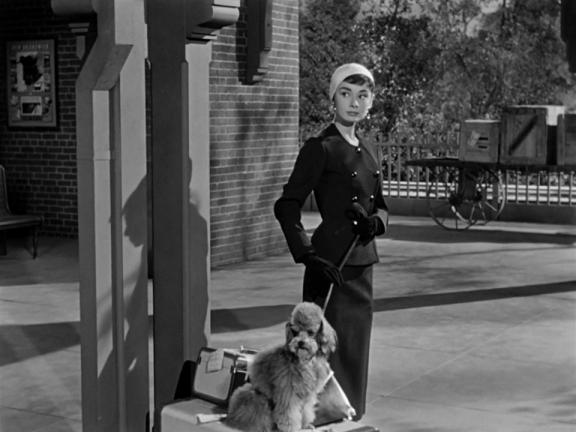 Whether it’s jeans or a dress, casual or formal,  a French woman rarely overdoes it – standing by that age old mantra that less is more with considerable aplomb.

A much thumbed book of mine called Elegance by Genevieve Dariaux explains that the French woman’s wardrobe is minimal but luxurious. Opposed to bulk buying cheap items like most of the world, a true French stylista will pinch and save, investing in fabulous pieces by Hermes and Givenchy even when her pay packet is no better than her British counterpart. Dariaux goes onto suggest that women could cut down on food to save for clothes . . . well, we all have our priorities.

So if you see me in a Chanel store, trying to squeeze into a classic bouclé skirt you’ll know that I’ve either had a windfall or I’ve committed to the French lifestyle for good. And if, like myself, you think it’s unlikely that you’ll be scrimping for that YSL coat, just remember that you can achieve French elegance without the expense.

We can all stroll down the streets looking like Jean Seberg in À Bout de Souffle by remembering that less is more, simplicity is key, and a lick of eyeliner never hurt anyone who was trying to look like a French girl.